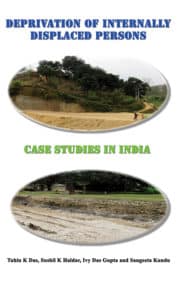 Many regions of the world are still suffering from civil conflicts. Generally, these conflicts are violent acts between communal or ethnic groups within the same state or country causing their population forcibly uprooted who are popularly known as internally displaced persons (IDPs) if they do not cross boundary. However, conflicts are not the only cause of internal displacement. Natural disasters are also responsible for internal displacement. The major problem of internal displacement is that IDPs do not fall within the current legal definition of refugees. As a result, IDPs are not protected under refugee law although they face many similar challenges as refugees. IDPs throughout the world are facing challenges like housing, jobs, education and healthcare. According to the United Nations High Commissioner for Refugees (UNHCR), “IDPs legally remain under the protection of their own government. As citizens, they retain all of their rights and protection under both human rights and international humanitarian law” . Therefore, it is the responsibility of the respective government to provide assistance and protection for the IDPs in their country.
In the light of the above arguments this book has been aimed at studying the actual deprivation of IDPs in India. Two case studies have been included in this book: internal displacement due to communal conflict in North Tripura district and internal displacement due to riverbank erosion in Malda district. Deprivations of IDPs have been analysed in terms of opportunity inequality and multidimensional poverty. The book has been concluded with a discussion on policy frameworks that are appropriate for two different cases.
Though this study has focused on deprivation of a special group of people yet the topics in this book would be of immense interest to general readers, and especially the researchers who are engaged in studying deprivation. Moreover, this book is expected to be a guideline to planners and policy makers who are engaged in framing policy on internally displaced persons.