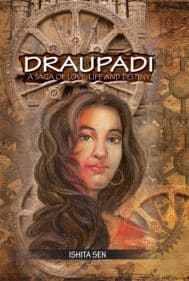 The Gamut of Human Emotions Never Change, from Mahabharata to Modern Times

s the epic Mahabharata still relevant in our lives today? Yes, says author Ishita Sen in her book, ‘Draupadi- A saga of love, life and destiny’.

As soon as I finished reading the prologue I was hooked.

Here is an author who is claiming that the Mahabharata is relevant and applicable in today’s time, in our modern lives.

The female protagonist in this story, Joyita has an unconventional, harrowing start in life.

And what doesn’t kill us make us stronger, they say.

Life turns Joyita into a strong woman who lives according to her own terms. She is uncompromising, unyielding, and utterly competent. And she chooses a man who can match up to her wits, her expectations.

Param Vikram Singh is a man who can rule his world with his brains, his intelligence, his compassion, and his heart—a true ruler of his people. Their relationship is such that they help each other shine. They complete each other.

But it cannot be denied that a person’s social standing shapes his views—however slightly.

And, Param’s royal lineage, his upbringing, his social stature make him falter at the most crucial juncture of his life.

One misstep is all it takes to mangle what could have been the most fulfilling of love stories.

Unrequited love has the power to destroy entire kingdoms and the Vikram Singhs fall prey to this gravest of maladies.

Joyita and Param go their separate ways only to be entangled together by destiny in such a way that neither can they love each other nor can they forget each other.

And all the other characters that are interwoven into the lives of Param and Joyita somehow get deeply affected by their strangest of equations.

The brilliance of this story likes in the fact that none of the characters have been shown to be flawless.

Everyone makes mistakes here. Everyone is a human and it’s human nature to err.

But in spite of that, they understand each other. There’s friendship between husbands and wives, there is acceptance.

In this society which is becoming increasingly volatile, such understanding, such acceptance, such tolerance is the need of the hour and Joyita, Param, Rishi, Siona and Himika just show us that through their journey.

Now coming to that part of the story, which is easily the most standout feature of this novel — the various situations in the lives of the protagonists have been compared to incidents from the Mahabharata.

Maybe, I should say the emotions have been compared, not the incidents.

We get to see and feel Draupadi’s plight, Arjuna’s misery, Bhima’s dedication through a new prism.

Once a reader goes through the entire narrative he or she will be bound to agree with the author.

Yes, human emotions never change with the ages. Love, lust, friendship, misery, repentance, valour, regret—all of that and much more, together make us humans.

As an avid reader, I would not hesitate to say that here is an author who has dared to see an epic in her own way and has rendered her perspective through a beautifully woven narrative.

The story, the characters, the situations are complex—just like life. All the characters that Ishita Sen has brought alive through her words can be loved, hated, respected, pitied, but they cannot be ignored—just like the book.