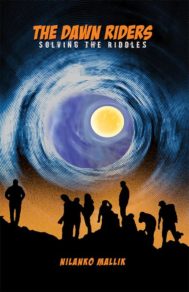 The Dawn Riders by Nilanko Mallik

Solving the Riddle, is the first book of a saga. It is a work of fiction, set in a hidden world within our world. It is about a race of humans with special powers, who have been living in secret. This race can see in the dark, move things which their mind, and can sense radiations and emotions just like normal humans sense things with their five physical senses. As with normal humans, there is good and bad in this race also, and apparently, the dark side has been getting stronger through the ages.
A prophesy made about the birth of twins who can end the rule of evil sets into motion the plot of the story, which involves nine young boys and girls, in their teens and college years, to undertake a journey to thwart the evil powers. They are trained at a special school. The nine are attacked by dark powers before they start their journey, but they overcome the evil forces.
Angry at the defeat, the ruler of the dark side wants to make himself more powerful by getting hold of a power which is hidden inside the earth. The nine decide to beat him in getting that power. Each side races on to get to the power first, but the power cannot be achieved unless a riddle is solved. The first book is about the solving the riddle. When the riddle is solved, it leads to a surprise.
The Dawn Riders attempts to bring a modern myth, set in India, complete with new-age mythology, combining myths and legends from various parts of the world through various ages.