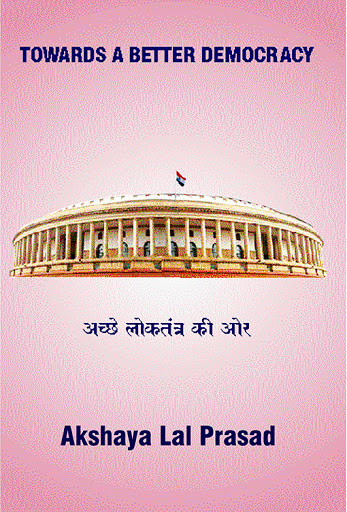 Towards A Better Democracy by Akshaya Lal Prasad

Earlier the Dictators and Kings were exploiting the people. With passage of time things have changed. Today democratic governments have emerged and control on information has waned. There is lot of transparency in the system. Now a days elected representatives are exploiting the people. Involvement of elected representatives in incidents of scams and scandals and disproportionate increase in the wealth are clear example of exploitation of people by the elected class. A change in the nature and contour of democratic government has become necessary.

The book – ” Towards a better democracy” talks about a democratic system whose objectives are – i) To ease government formation ii) To provide stability to government iii) To create healthy atmosphere for matured people in politics -. and thee by a) Control corruption b) Discipline political parties c) Minimize disruption of house proceedings.