A head in heels 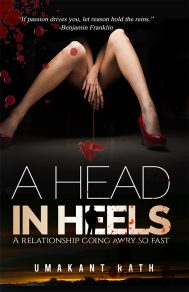 A head in heels by Umakanth Rath

“A Head in Heels”, is a story that strives to find an answer to a relationship of shared self-interests between a couple who entangle themselves in an illicit affair.
Purvi’s lack of respect for her husband was something Ankit had chosen to ignore and by doing so he had become an integral part of the deception. In the eyes of his wife Nisha, Purvi and Ankit’s love story was a total sham and even non-existent according to her. Nothing seemed to have bound Purvi and Ankit together in any way in the relationship they started. If Purvi had died, God forbid, Ankit would have been the first to care but the last to know.
Ankit and Purvi did not intentionally jump into the affair. They met inadvertently, and began with innocent banter over cups of coffee and lunches, and ended up sexting late nights. Of course, it was not a well-thought-out scheme or a ruse, but they just went with on it without considering the eventual outcome of such a relationship.
Like many others, they too wanted to come out of this liaison unharmed, but what happened to them finally is anybody’s guess. There was never an excuse for Ankit and Purvi to have an affair in the first place and the consequence were far more treacherous than they had ever imagined.
Here is the story of Ankit and Purvi for you…