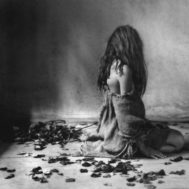 We never met and I don’t expect you to know me. Yet I write to you because I know you would understand.

Dear mother of a boy. You think he is still the chubby- cheeked boy asking for help whenever he fell or sulked every now and then when you refused to give him his favorite candy. He sulked now but for bigger reasons.

You gave him love and nurtured him so that he becomes a better person someday, but he turned out to be what you least expected into a ”dead leaf”. Disgusting isn’t it? The same way when he hit me hard in the face last night and called it ”love”. Every now and then he calls it his ”possessiveness.” And every now and then I try to find reasons for his doings. I was like his favorite toy the one that he used only when he wished to and other times I was like his expensive bottle of wine the one that he liked to keep safely in his closet.

You remember, you threw a party for everyone when he was born? You were so happy. The same way, I was too happy when he touched me for the first time. Do you remember the first time he kicked you and you rejoiced every second? Did it hurt? Well, it did hurt me when he kicked me hard and then came with all kind of apologies. You would know all this, won’t you?

Dear mother of a boy, he broke glasses then and now he believes in breaking people mostly their feelings. You will know better because he hurts you the same way he hurts me, because we both know that we were in love with a monster in a human body and I pity you because you are a mother of no – man.

Burning in the Flames of Futile Love Deceased Humanity