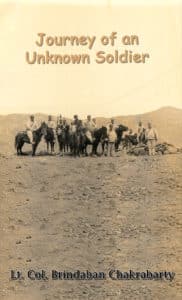 Journey of an Unknown Soldier by Lt Col Brindaban Chakrabarty

“The author was born on Oct 1945 at a village in 24 Parganas. His father moved to Calcutta when he was three years old. Due to financial hardship in his
family he moved to his aunt’s place at a remote village and studied there till class 4 and thereafter returned back to Calcutta. After schooling he got his admission into Ashutosh college. After his mothers demise he got enrolled in the Army in 1963. After slogging for 7 years he got commissioned in the Dogra regiment and thereafter served in various appointments in Army. He finally hanged his uniform in year 2000. He is leading a comfortable retired life with his wife. He is a proud father of his two sons who are also Army officers.”