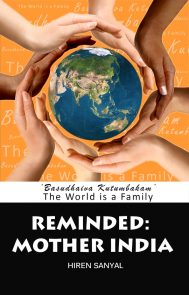 India has an unique philosophy. A rare ideology. ‘BasudhaivaKutumbakam’. Everybody in the world, all inhabitants of this mother earth, are India’s relatives. Brothers and sisters. Concept of thorough unity. Of mankind.
To some people, it seems to be an utopia. An absurd imagination. Moreover, in this war-torn world, where people are divided in religions, exploitation, in apartheid, in nations, in states, violence and many other divisions.
But that is not factual. Because, Indian civilization has proved itself to be successful, to endure the enormous pressure of the time. For thousand and thousand of years. Followed by crores of Indians. Since this long period of her civilization, it renders a special message to all other civilization too.
The writer has tried to depict that message in this novel. Not in form of some lectures. But through a story and it’s characters. That is his theme. The plan. The lifeline of this novel. Not of some individuals. Not of some private affairs. But of surpassing numbers of people and their life. And that is the storyline.