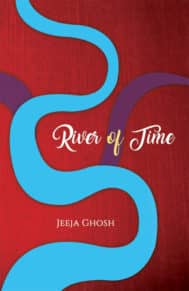 River of Time by Jeeja Ghosh

Tagore has been a close companion since childhood. My mother who was passionate about his creations tried to imbibe in me his essence of the depth of his philosophy, his deep association with the Supreme. But what does a child’s mind really understand such magnanimity of the treasures of his ocean of his works. Yet his words always intrigued me. The verses from Gitanjali mesmerized me even at the tender age. The words reverberated in my ears and their rhythms touched the inner core of my heart. Again, the child’s voice speaking in Shishu evoked in me the excitement and thrill of adventure. As I moved into my teens, Tagore was a part of the school curriculum. To be honest Bangla was never strong point. I was not an avid reader of Bengali literature. My writing skill in this language was below average. The fragrance of Tagore’s verse stayed with me mainly because of my mother’s inspiration. They surfaced later as I feel, in my poetry.
I studied literature in English as an operational subject alongside with the compulsory English paper in my high school. This provided me with the opportunity to get a glimpse into the works of Wordsworth, Shelly, Keats, Browning, Lear, Frost, and a host of others. I remember writing my first poem in English when I was in class X. Now I find it silly and immature, written from the perspective of a rather sentimental teenager. Yet at that point it had given me immense joy and the feeling of accomplishment.
My span of writing poetry has not been very consistent. I got a trigger to write during my school days mainly from the encouragement from my teachers and friends. This continued though my years in college. However in college, there was an additional incentive – it made you more popular and attractive. You were marked as an intellectual, a much glamorous prospective which many young people at that phase of life craze to aspire.