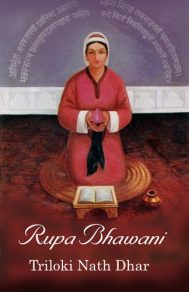 This book has made an in-depth study of the scriptures, philosophical literature and other connected works. The author himself has made the requisite spiritual journey to enable him to give detailed analytical meaning of the vakyas by the Divine Mother. Translating the vakyas of Rupa Bhawani has been a herculean task not only because it required intellectual acumen, spiritual depths, highest knowledge of philosophy propounded here, but also required literary proficiency and a researcher’s insight to decipher and understand them. The nuances of the Kundalini yoga have been brought out here, besides lucid accounts of the four states of Wakefulness, Dreaming, Sleeping, and Turia (fourth). The four stages of utterance, i.e.-Para, Pashyanti, Madhyama, and Vaikhari have also been analysed. Shri Triloki Nath Dhar has also drawn a parallel to what Lord Krishna has said in the Bhagwat Geeta and has quoted from the English Literature, Shakespeare, Ezra Pound, Harold Monro, Herbert Read, Wallace Stevens and the like to bring home the points made in various vakyas, substantiating the interpretation provided by him. –‘KUNDAN’, KOSHUR SAMACHAR, AUGUST 1997