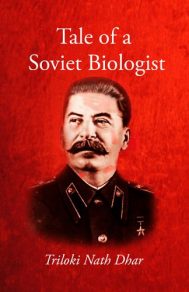 Tale of a Soviet Biologist by Triloki Nath Dhar

The story portrays some aspects of persecution conducted by Communist Regime in Soviet Russia under Stalin. It is a pure romantic fiction in which attempt has been made to prove the fallacy of the materialistic philosophy of the Bolsheviks. It shows how Communists while calling themselves most scientific persist in error and most mercilessly, for their own ends, suppress all kinds of opposition and in this do not even hesitate to derogate from the principles of action set down by Marx and Engels.