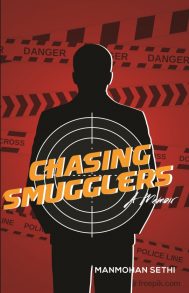 The book describes real-time cases detected and investigated by Mr. Sethi during the time he served as Assistant Collector of Customs Calcutta, Assistant Narcotics Commissioner Lucknow and Collector of Customs Visakhapatnam.
The first case of American Tourist relates to an American employed by a smuggling syndicate for smuggling Gold into India. The case was detected without prior information but on suspicion from a study of his passport showing frequent visits through various ports. The syndicate had won over many Customs and Police officers who were facilitating smuggling.
The second case relates to biggest ever seizure of gold from a ship on information from an informer in China Town.
The third case describes how biggest ever seizure of Opium was made a thousand miles after the cars left Utter Pradesh , Picked up Opium from Mandsaur in Madhya Pradesh and were to deliver at a minor port on East Coast for smuggling to Srilanka
The fourth case relates to biggest ever smuggling of 400 cases of Scotch Whisky by a ship which had come to Visakhapatnam to pick up cargo.