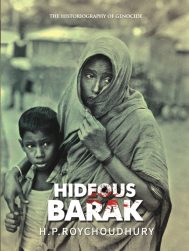 The book is written by a septuagenarian how on the one hand India and Bengal in particular was destroyed by Gandhi doing politics under the cover of a SAINT in the dress of a half naked FAKIR befooling the common people with religion and ‘Non-Violence’ bringing communal violence between Hindus and Muslims and destroyed the country by division and making Hindu and Muslims as the enemy to each other forever but how Barak Valley, such a tiny region of such a big country, played a major role in bringing back Hindu-Muslim unity even after the Partition of India. It focuses on the Barak valley, Assam valley, the Sepoy Mutiny, INC, role of Gandhi in Hindu-Muslim riots, the Partition of India and role of PM Jawaharlal Nehru. It also gives an outline of the future of the Barak Valley.